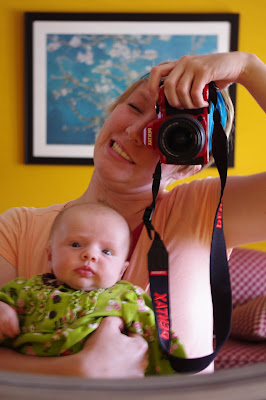 Hello. My name is Alicia and I’m a Worrywart.

But let’s be honest… are you actually surprised by that? Just ask Billy. He is well trained in the correct responses to my many irrational (and periodically, but only periodically, rational) fears and the usual tears that accompany them.

This last week was a bit rough. Tired, frustrated, and feeling hopeless, I felt that nothing would ever change. I was too weak to change the things about myself that were overwhelming me. I worried that I was doomed to be a lazy blob for all eternity.

But this didn’t all start like this, so let me back up a little.

Having a newborn has been… well… difficult. If this is a news flash to you then I don’t really know what to say to you. Today Millie is ten weeks old. Almost two and a half months old. She sleeps better. And I am getting better at knowing what she wants though that is not always the case, and she is becoming more fun. Smiling, squeaking as she almost laughs, and generally being adorable.

So after two months of the house being a mess, her room still overflowing with the endless gifts from family and friends, a garden still full of weeds and the rotting vegetables from last summer, and still no dinner on the table, I started to worry. Was I failing? Every night I would make goals. At the beginning they started out rather ambitious: finish Millie’s room, plant garden, end world hunger. After a few days, they had become small and somewhat pathetic (at least in my eyes): Monday= dress Millie, Tuesday=shower, Wednesday=finish one load of laundry, Everyday=smile and remember to kiss Billy when he gets home from work. Yet, sadly, even this list seemed out of my tired, lazy reach.

Being someone who enjoys lists and enjoys checking things off said lists even more, these things began to get me down. When Billy would get home from work and I had nothing ready for him to eat, I was overcome with guilt. There he was, working 10 hours a day with only a few hours of sleep each night and I couldn’t even greet him with a nice meal. What a terrible wife. He never complained and always told me to relax but it just made me feel worse.

In the wee hours of the morning, as I would lay there listening to Billy’s slow, even, sleepy breathing and praying that Millie would keep breathing (like I said… worry worry worry), I began thinking of everything that I had done wrong. I thought of how I spent all day watching silly movies on Netflix, how I hadn’t seen or talked to anyone but Millie and Billy for three whole days, how we still didn’t have a working budget after a year and a half of marriage, how the dirty dishes had taken up permanent residence in the sink and were quickly trying to take control of the counter.

I’m sure that I don’t need to tell you that this did not help anything. It depressed me. All I could see were the things I was failing at. All the unfinished projects. All the piles that I had labeled “To sort” that I now wanted to label “To Throw Out the Window.”

I began thinking I would never change. Even if I tried harder the next day, I would inevitably fail. I was naturally unorganized and tended to only get things done when someone was there to help me and motivate me.

These thoughts led to a feeling of deep hate. Hate for myself. How could I be so lazy and pathetic? How could I never get anything right?

I would just have to accept my fate. There was no way I would have the self-control to lose the baby weight, no way I would motivate myself enough to clean out the office, and really, no way to overcome any of the weaknesses that I was delusional enough to think I could weed out of my life.

I was weak, lazy, and pathetic.

At least, that was the conclusion I came to at my two am worry session. It was negative and pessimistic, but all my eyes would see were my past attempts at change and the overwhelming failures. It doesn’t help that I was going off of very little sleep. (I tend to get rather emotional and slightly crazy when tired.)

And then something happened: the next morning, I got out of bed, went to the neighborhood exercise class, and when I came home I didn’t let myself sit down. Instead, I got to work. All the dreaded tasks that I put at the bottom of the list went straight to the top. I was determined that if I got those terrible terrible assignments done first (i.e. calling insurance, making doctor’s appointments, paying hospital bills), then maybe I would do the things that I enjoy (gardening, organizing). And by golly, it worked! One by one, I checked things off my list and felt a tiny glimpse of freedom and accomplishment.

I could do this. I could change my ways, overcome my natural tendencies, and be an organized, happy person. Sure, I hadn’t quite gotten around to making dinner but let's not get overly ambicious. Baby steps, friend, tiny baby steps. Maybe next week will be the week we eat a real dinner again. Maybe. Maybe not. But Jimeny Cricket, I sure will keep trying.

I love this post. This is exactly how I felt after having Charlie. It will continue to get better and easier again.

I am SUCH a worrywort! The worst acutally! Im in trouble when I start having children! :)

If it makes you feel any better, I'm pretty sure I didn't cook for a solid month after I had LiLi, Don did all of the cooking. And I stayed in my pajamas all day for a very long time. But with your little baby changing daily, the important thing is that you're there to love an hold her!

I think you are pretty incredible! I can't even fathom having a child right now. I think we as women feel obligated to do so much and that guilty feeling comes when we don't accomplish it all is inevitable. Just keep being the wonderful mother that you are and eventually everything else will fall into place.