The Demon Barber of Fleet Street...?

If there's one thing I learned from the musical/movie Sweeney Todd (and there is basically just one thing I learned from it), it's that nothing is simply black and white. I heard someone state the opposite this morning, and my skin has been crawling ever since (it could also be because I had a large Diet Coke for breakfast, but I'm going to keep it with the moral issue at hand). 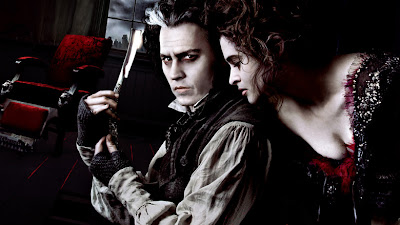 As probably everyone knows, Sweeney Todd was a barber who, out of revenge, became a serial killer. Not a very pleasant plot. But he started out as a really reasonable guy. He had a wife and daughter who he loved dearly, a profession that he excelled at, and everything was just peachy. If you took the black and white approach to things, either: Todd was justified to kill all those people because he had to get his revenge; or Todd was a terrible man and the worst person ever to live. You see the problem here? There is no black and white.
Yes, he was absolutely terrible. There is no justifying the crimes that this fictional character committed. Todd was a terrible man, but he didn't get there alone, and there certainly was a hint of goodness left in him when all was said and done. He still loved his wife and daughter, and in the end completely recognized the horrors he had committed. To me, he's not the "bad guy" in the movie. There is no "bad guy," but there is also no "good guy."

(Side note: I guess there was one other thing I learned from that story: revenge is bad. Don't even try it).

On a more realistic side, I read articles all the time about men and women who have committed terrible crimes. (If you recall, I'm studying to become a social worker, so these things fascinate me. I'm probably one of the few people who jump on the "Justice" page on CNN.com just to see how things are going in that realm). Usually the story starts out pretty simply: so-and-so did this, or may have done this, and they're in big trouble now. Then we, the public, cheer for justice being served, and all is well. But there is almost always more to the story. We soon find out that so-and-so was verbally, physically, or sexually abused as a child. Or bullied at school. Or lost all sense of hope and saw no other way out. But what if someone had noticed? What if their middle-school teacher had noticed that he was withdrawn? Or had unexplainable bruises on his body? What if a co-worker noticed that something was "off"? Things may have ended differently.

No one is black and white. I'm pretty positive that the concept applies to everyone. For example, who hasn't had to "put on a good face"? Who hasn't gone through tough times and tried to keep it all quiet? There is so much more going on in everyone's lives than we realize. If we think everything is merely black and white, we will miss so much.

Along with that, I recently heard this point made, and I think it fits in perfectly here: "If you come upon a person who is drowning, would you ask if they need help—or would it be better to just jump in and save them from the deepening waters? The offer, while well meaning and often given, 'Let me know if I can help' is really no help at all." (Source). While this was spoken to a primarily Christian audience, I think the concept is universal and profound. What are we missing in our interactions with others? And what can we do to help relieve the invisible-to-us burdens that others around us are carrying?


I hope this made you think. But most of all, I hope you don't judge me for this. I'll step off my soap box now.