Women in Music- Part One | "Girl Indie" is not a genre

I'd like to introduce you to one of my closest friends, Kendall. We have known each other since our middle school choir days, and continue making music together in our individual music ventures. Here are her thoughts on being a female in the music industry. -Allison 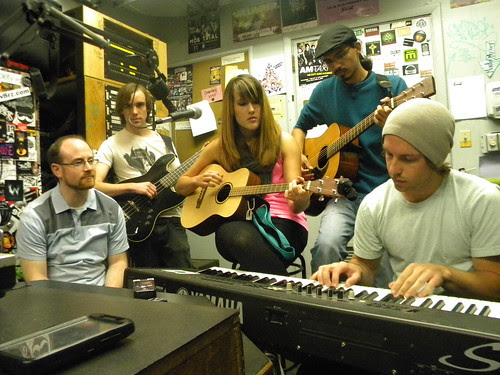 That's a picture of my band, "Cartoon Bar Fight." Upon first glance, you'll note that there is only one lady in this group--and that's me.
I have been songwriting, singing and playing in Cartoon Bar Fight for over four years. I initially started the group in Fall of 2007, during my first semester at San Jose State University, and was quickly joined by Dirk (the lovely fellow on the far right, who also happens to be my boyfriend), the only other remaining original member.
We live in the San Francisco Bay Area, and play indie rock music influenced by bands like Eisley, Radiohead, Feist, Brand New, Bon Iver, Neutral Milk Hotel and Arcade Fire.
I have certainly been spoiled to find such intelligent, respectful, creative and extremely talented band mates, and I love them all like family. With them, I don't feel there is much of a divide because of gender. I don't feel lonely, or like the "odd one out" or anything like that, and this is because we share common goals, interests and skill levels. Though I would love to have another woman in the band for vocal harmonies and duets (I adore the way female voices sound in harmony), we haven't found her yet.
Over the years, I've given a fair amount of thought to how gender plays out within our band, as well as in the lower levels of the music business. Getting in to the music industry is tricky for anyone, but it can get even more frustrating for women who are trying to make their way, due to subtle sexism perpetuated by band mates, family members, booking agents, sound engineers, folks in the audience, and even from ourselves. Allow me to count some of the ways:
(Post continues after the jump)--