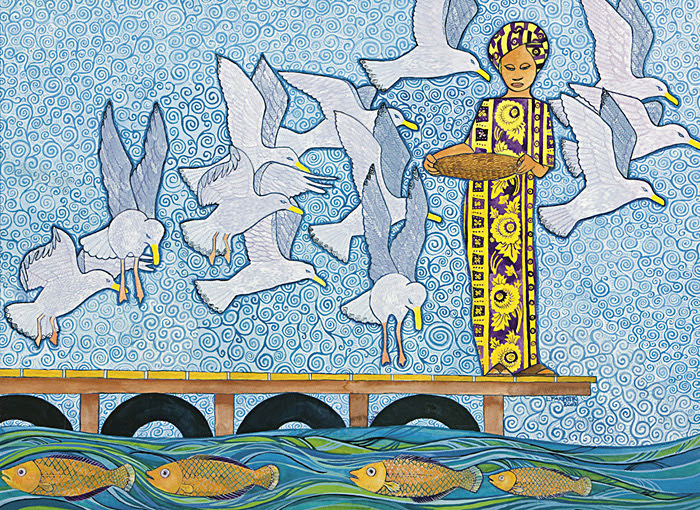 Who can find a virtuous woman, II
by Louise Parker (from here)
I love the proverb of the virtuous woman. The woman described is so contrary to modern culture, but so perfectly admirable. And the terms to describe her are also, in fact, quite contrary to modern culture, but again, so perfectly admirable. And a little confusing.
"She seeketh wool, and flax, and worketh willingly with her hands." ...while perusing the women's clothing at Target?
"She is like the merchants' ships; she bringeth her food from afar." ...a far-mer's market?
"She riseth also while it is yet night, and giveth meat to her household, and a portion to her maidens." ...and when it says meat, it really means frosted shredded wheat with 1% milk, right?
Despite some confusion, and some contradictions to the occasionally less-than-praiseworthy lifestyle that I obviously lead (yes, cereal is my primary food group), there are some universal truths to a virtuous woman mentioned in these passages:
"Strength and honour are her clothing; and she shall rejoice in time to come." - You can't put this sister down! She's the ultimate optimist!
"She openeth her mouth with wisdom; and in her tongue is the law of kindness." - She's super nice to everybody! She also probably hosts great dinner parties with stimulating conversation.
In a world that constantly tries to put women down, or make us think that we're too smart, not smart enough, not curvy enough, not thin enough, and just not enough, the proverb of "How to find a virtuous woman" can teach some real lessons. Read it, pray about it, and decide what kind of a woman you want to be. No, you don't have to wake up before dawn to slaughter a pig and make some bacon for your household and all of your extended relatives who live within a 10 mile radius (in fact, you will never find me doing that, ever). But there are still some beautiful lessons and some valuable virtues to be found in this proverb. And for the men: what kind of woman do you want to call "yours"?

Related thoughts: My aunt's blog post about the Photoshop Diet, and another post of mine, "Learning that I am an 8 Cow Wife." Enjoy!


(This essay was originally posted here).
Posted by Allie at 8:00 AM

Labels: Self Worth, You Are Beautiful