I always knew I wanted to do something important. Travel. Study. Help people. I wanted my education to mean something. I wanted my life to leave a mark. So I moved forward, heading toward that ever so broad goal of “accomplish something of meaning.” But plans were always thwarted, either by finances, simple bad luck, and, let’s be honest, by my own fears and apprehensions. Time after time, year after year, I never quite reached a sense of self. Even with the progress I was making with my formal education, I felt something was missing.

And, I saw a pattern: I was defining myself not by what I was doing and who I was, but by that I wanted to do.

But life has a way of changing those plans for us. And I let it. I lived in Germany for a year and spent another six months in Austria. I learned a new language. But, that was not the way that I had planned it. Then I got married younger that I had anticipated (I planned on being a well-established 26 year old) and had a baby much quicker than my younger self had ever imagined. Although not part of the plan I had so determinedly created, I wouldn’t change any of those for the world.

However, I have been left wondering: if I was not going to be a career woman who traveled the world, then who was I going to be? Would my life have meaning beyond the walls of my little home? How would I leave my mark? Would I leave a mark at all?

I began to think of the people who left marks on my life, people who affected who I was, and people who I admire. I began to see the mark that I could leave. Even without a paid career to push me along, I leave a little mark all along the way. And that is what defines who I am.

I leave my mark by bringing my friends from all aspects of my life together to be in a book club, where books are chosen that help me see the world through different eyes and where we share our ideas and passions. I know that I can define myself by the charity I show my neighbors by making them dinner when life is just too much for them to handle or by stopping to ask how they are doing. By creating a home where creativity, inspiration, and love are present, I can help our daughter gain a love and appreciation for the arts and sciences, just like my husband and I have.

Who am I? I am a wife, a mother, a sister, a friend, and a neighbor. I can be kind, thoughtful, creative, and motivated in those individual relationships. I have hobbies and interests that are unique to me. I may not be paid for what I do every day, but I know that I am not defined by that. 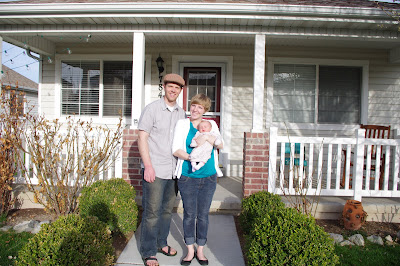 I love this post, by the way, because I identify with it so much....at any age!